BEIJING — A Chinese high-speed train was derailed Saturday when it was hit from behind by another express, state media reports said, throwing two carriages off a viaduct and killing at least 11 people.
The derailed train had been crippled by a lightning strike and was stopped when the second one ploughed into it, the reports said, in an accident likely to raise new questions about the safety of a rapid rail expansion.
The D3115 high-speed train, from Hangzhou to Wenzhou in eastern China's Zhejiang province, was rammed from behind by the D301 express in its destination city, China National Radio said.
The first train derailed and two of its carriages fell from an elevated track at around 8:30pm (1230 GMT), the official Xinhua news agency reported, citing local firefighting sources. At least 89 people were injured, it said.
Photos posted on Chinese websites and microblogs showed a long rail carriage standing vertically, with one end leaning on the viaduct and the other resting on the ground at least 10 metres (33 feet) below.
A second carriage also was lying fully on the ground below the track, having apparently fallen completely off, with rescue personnel swarming over it.
They also showed mangled metal sections of one carriage and people being carried away from the scene, although it was not clear whether those victims were injured or dead.
Xinhua said the capacity of each car on the train was about 100 passengers.
China National Radio quoted an unnamed Shanghai Railway Bureau official who had gone to the scene as saying the D3115 was halted by a lightning strike.
The accident occurred less than a month after China inaugurated with great fanfare a new flagship $33 billion line from Beijing to Shanghai that halves the rail journey time between the two Chinese cities to five hours.
It was opened on the eve of July 1 celebrations to mark the 90th birthday of China's Communist Party and authorities touted it as yet another symbol of the country's growing advancement.
However, the new Beijing-Shanghai line has suffered problems with delays caused by power outages, sparking a slew of criticism online and in Chinese media.
China has poured money into a massive rail expansion but the huge investments have spurred allegations of corruption, and raised concerns over costs and whether corners were being cut on rail safety.
China's state auditor has said construction companies and individuals last year siphoned off 187 million yuan ($29 million) from the Beijing-Shanghai project.
The revelation followed the February sacking of former railways minister Liu Zhijun, who allegedly took more than 800 million yuan in kickbacks over several years on contracts linked to China's high-speed network.
The official China Daily said Monday the power supply incident on the Beijing-Shanghai line had raised fresh concerns over the safety of the landmark link, which opened a year ahead of schedule.
Similar trains are used on the line where the accident occurred, which was operating before the new Beijing-Shanghai link.
In April 2008, 72 people were killed and more than 400 injured when one train derailed and another collided with it in the eastern province of Shandong.
The accident raised transport safety concerns for the Beijing Olympics just months later.

There was reports of problems from the start, it was mostly minor things but this time it's serious. They need to have better safety guidelines. All those the great accomplishments and stuff they were talking about and already so many problems.

EvilTofu said:
There was reports of problems from the start, it was mostly minor things but this time it's serious. They need to have better safety guidelines. All those the great accomplishments and stuff they were talking about and already so many problems.
Click to expand...
Aside from grounding of signal towers, I'm not sure that one can easily mitigate and protect against lightning strike events across thousands of miles of open track (if that is in fact, what really happened). Generally, in the US, railroad tracks are specifically listed as one of the things to actively avoid during a lightning storm.

Still, I doubt that the train was seriously damaged by the strike as passengers generally are not injured in these events (ie. Faraday Cage). But, having a train stopped on the tracks, rail operators they should have had better emergency communications so that their traffic controllers can likewise halt other subsequent traffic on the line. To be fair though, this isn't a uniquely Chinese rail issue; rear impact derailments happen all the time the world over and at much slower speeds. Given the speeds that these Bullet Trains travel at, I'm surprised that the preliminary death toll and stated number of cars derailed weren't greater. Moreover, I'm even more surprised that we have pictures of it as the PRC usually imposes a news black out on such catastrophic events vis a vis nationally sensitive issues.

Addendum: After getting more info, it seems that the lightning strike disrupted power on the line, thus disabling the train; the train was NOT struck by lightning as I had first assumed from the article. Also, the trains involved in this collision were NOT High Speed Bullet Trains but older regular service cars. 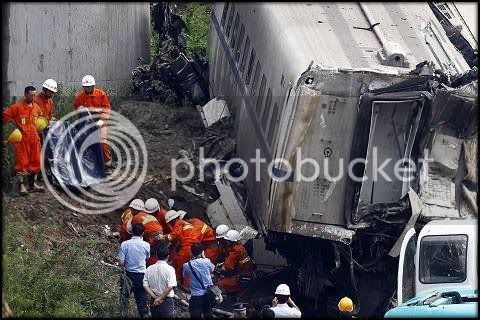 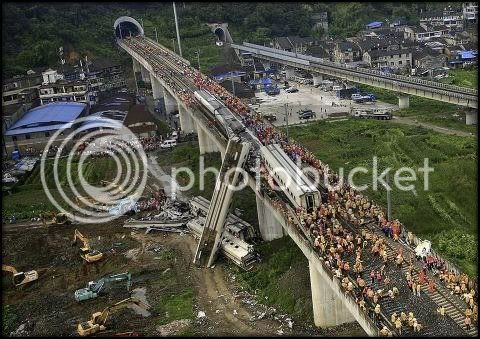 Click to expand...
Despite the tragedy however, it must be remembered that the PRC, with its massive population, needs to continue to extensively develop and maintain rail travel both for commercial and national interests reasons. The trick is keeping the pervasive and deeply ingrained graft from being able to affect what is considered one of China's most vital resources.

The latest update is that the Chinese blogs are rampant with allegations that unaccounted bodies of those still missing are being buried with the destroyed train carriages as the PRC government rushes to clean up the crash site as fast as possible. In videos released onto the net, one purportedly shows dead bodies falling from the wreckage as the damaged carriages are being forcibly pushed into pits. Critics on the Chinese internet are complaining that none of the wreckage was being properly inspected and accusing the government of whitewashing the entire affair, as the post accident finger pointing begins.

...The crash also reinforced scepticism about recent Chinese claims that the country is producing the best rail technology. Two days before Saturday’s crash, the state-run People’s Daily newspaper rebutted criticism of the Beijing-Shanghai high-speed rail link crowing about its superior technology. A Chinese Railways Ministry spokesman went even further, claiming his country’s high-speed rail technology was far better than that of Japan’s bullet trains or shinkansen.

In the aftermath of the crash, some Chinese reports suggested an about-face, pointedly saying the trains involved in the collision were not of original Chinese design but the result of joint ventures with Japanese and Canadian rail companies.

Source: http://news.hexun.com/2011-07-24/131706831.html
Click to expand...
In Japan, where the shinkansen network has run for 47 years with a near-perfect safety record, local newspapers leapt into the fray. “The fear that [the] Chinese high-speed rail system may be dangerous has become a reality,” said the Asahi Shimbun. “The essential technology was not something they themselves had developed over many years, but instead collected from various countries which some pointed out was susceptible to causing troubles.” While many Chinese reacted cynically—one person on Twitter swore never to fly on any Chinese-built planes—the rest of the world would be justified in worrying, too. As our colleague, Ed Flanagan, has pointed out, this is the same country that has built a bridge that was just shipped off to Oakland to be used in an earthquake-prone region.

Source: http://behindthewall.msnbc.msn.com/...-deadly-train-crash-in-china-provokes-outrage
Click to expand...
Additionally, a young girl was found alive in the wreckage, some six hours after authorities had supposedly stated that all bodies had been found and already removed.

28 July 2011 1003 hrs
[FONT=Arial, Helvetica, sans-serif]
SHANGHAI: The Chinese company that designed the signaling equipment blamed for a deadly train crash in eastern China apologised on Thursday over the accident, which has stirred up fierce public anger. Two express trains collided Saturday on the outskirts of the eastern city of Wenzhou, killing at least 39 people in China's deadliest rail disaster since 2008 and the worst yet on the country's young high-speed rail network.

"(We) express deepest condolences to the dead and a most sincere apology to the injured and families of the dead," the Beijing National Railway Research and Design Institute of Signal and Communication Company said in a statement. Earlier, the official Xinhua news agency quoted a Shanghai railway official as blaming the signaling equipment for the crash.

The signaling system "failed to turn the green light into red" after a lightning strike, it quoted An Lusheng, head of the Shanghai Railway Bureau, as telling an investigators' meeting. The equipment had been operating since September 2009, Xinhua said. The institute, part of the state-owned China Railway Signal and Communication Corporation, also pledged to work with investigators, take responsibility and face any penalties deemed appropriate.

"(We) will move swiftly to carry out an overhaul with all resources to ensure our products are safe and reliable," the statement said. The apology came as Internet users, relatives of victims and state media turned increasingly critical of the way authorities handled the accident and its aftermath, accusing them of "arrogance" amid suspicions of a cover-up. Chinese premier Wen Jiabao on Wednesday ordered the results of the investigation into a deadly high-speed train crash be made public, amid a growing outcry over official handling of the accident. Premier Wen Jiabao travelled to the scene of the crash on Thursday amid the public fury and growing concerns over not just the country's rapidly expanding high-speed network but the country's overall breakneck speed of development.

The PRC government is just so predictable. It finally realizes that the entire nation is so pissed at their handling of the crash, and too, that the public wants a pound of flesh, so there's no sweeping it under the rug. So, instead of coming clean with a real investigation, it simply picked from a list of the usual suspects and pointed the finger at one, hoping to get the public anger and wrath directed at some small government agency, instead of having any real questions asked. Eg. Is high speed rail in China really safe after all?

Oh, and please don't look at the party; it wasn't our fault, LOL...

Well, it was too good to last.

The attention grabbing shots of China's president bowing in respect to the dead may have made good press, but the continued public hue and cry for a "real" investigation (and not fault the signal design company, which people suspect is only being used as a scapegoat) has finally forced the PRC to respond with its fundamental political reflex; the totalitarian card. All news reporting, discussion, and public viewing of information on the crash is henceforth forbidden by order of the government.

China is trying to advance too fast

mr_evolution said:
China is trying to advance too fast
Click to expand...
Well, for my money, one Great Leap Forward happening in my lifetime was enough.
D