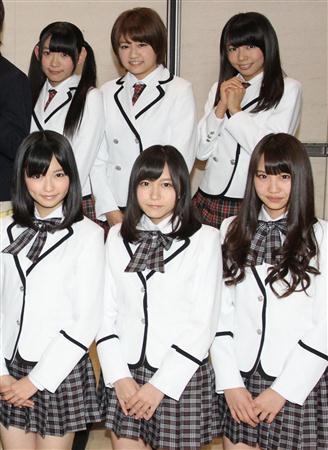 On February 29th, it was announced that six members from Johnny’s Jr. and six of AKB48’s Team 4 members will be starring in NTV’s late night drama, “Shiritsu Bakaleya Koukou (Private Bakaleya High School)”, which will start its broadcast on April 14th (every Saturday, 12:50 A.M).

This drama will mark the first project for Johnny’s Jr. members and girls of AKB48 to co-star in a same drama. In regards to AKB48, Johnny’s Jr. member Morimoto Shintaro (14) stated, “They are a national idol. That’s amazing.” AKB48’s Shimada Haruka (17) then commented, “Since we would not usually co-star with a Johnny’s Jr., I can feel the weight of this project,” and showed her nervousness at this stage.

AKB48’s own producer Akimoto Yasushi (55) has created his own original, youthful story for this project with a merger of a delinquent high school and rich girl’s high school as a setting.

Morimoto, who will play the leader of these high school delinquents, revealed, “Although the real me would settle everything through talking, I am interested in learning how a real fight goes down.” Shimada added, “Although I am a clumsy person, I want to show how capable I can be on-screen,” and declared her aspirations through her role as a student council president.