28 years old Ham Yeonji on 3 years of marriage “I wanted to get married after my first meeting.” 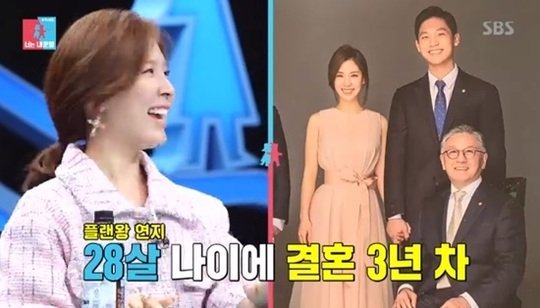 Ham Yeonji said she wanted to get married when she first met her husband.

Ham Yeonji appeared as a special MC on SBS Same Bed, Different Dreams 2: You Are My Destiny which aired on October 28

“I was in a hurry to get married.” Ham Yeonji said, “I wanted to marry this person from the very beginning when I met them.

MC Seo Jang-hoon asked, “First Love?” And when she answered, “It’s not the first love,” the other MCs laughed “Why do you ask such a question?”

My personal quote : Fyi she is the grand daughter of an honorary chairman who is part of the Ottogi Corp (Conglomerate) that manufactures instant packaged curry, mayonnaise and ketchup. Her husband is a general public worker in the financial industry.

1. [+11, -17] I have been living a life of twenty-one years. I have met all the chaebols (rich conglomerate people), but they were all idiots.

2. [+7, 0] It’s the best thing to live without worrying about money , have a bright face peace and quiet .. the subway way to work .. Look at the faces of our common people.